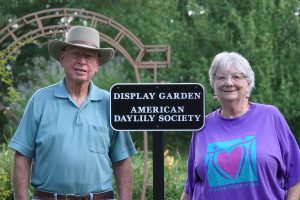 Leemer was gifted his first daylilies in 1980 when a co-worker suggested he visit a Daylily DIsplay garden near Centralia, MO to get ideas.about landscaping his newly built home and yard in Millersburg Area. And what a garden it was! Earl and Hazel Gritton were the ultimate ambassadors for daylilies and Leemer went home with 30 or more cultivars.  Carol was already on the scene (they married in 1982) and the Daylily journey began. They joined the local Central MO Daylily Society where local gardeners and hybridizers recommended varieties, foliage height, blossom size, care and cultivation of this remarkable species - hemerocallis. Attending the club sales and the annual farmer's market daylily sales added to the collection over the years. When they started attending regional and national daylily events, door prizes, silent auction plants, live auction plants, and hybridizer introductions were added. At peak, the garden had over 600 different cultivars. Reorganizing the garden, losing some because of weather related issues, and lately paring down to a manageable size, result in 270 currently in the garden.

Carol and Leemer were first attracted mainly to the large bright reds and yellows. They learned to carefully label each flower so it could be identified for entry in the annual Daylily Show. They then discovered the subtle colors of the pastels. Several local hybridizers were partial to the spiders and unusual forms and these became favorites. Next they began to pay attention to when the flowers appeared and added very early, early, mid-season and late bloomers to the mix. Currently a fascination for the miniatures daylilies has added several of those to the garden. 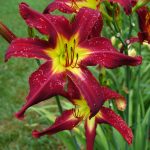 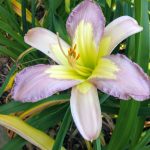 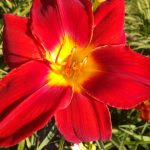 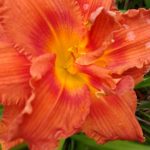 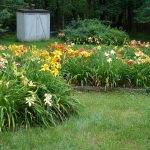 Featured at the Garden

Region 11 of the American Daylily Society includes Missouri, Kansas,and Oklahoma. We have always been partial to daylilies hybridized by folks in our region. The daylilies are hearty and perform well in our area. We have a nice collection of flowers hybridized by these notable people;

At an art auction at our Unity Center in Columbia we were the lucky winners of a metal sculpture created by local metal artist, Don Asbee. It has a special place in the middle of the yard surrounded by Salter's Magical Swirls.

Carol became enamored with the idea of a "moon Garden" that could be enjoyed in the moonlight from our deck.  This is developing slowly as the white and near white flowers are dug and moved.  Nocturnal and fragrant daylilies may also find a home there.  Nancy Rold's Lamp Unto My Feet is the first in that bed to bloom, looking like a group of yellow butterflies flitting around.

Each year at the flower show there is a special category featuring Region 11 Hybridizers. For ease in selection, we put most of those in one Daylily bed. We also put several plants from the same hybridizer together to show off their distinction or to have several of the same variety bloom in succession.  Examples: Loyd Calvin's beautiful Voyager series of double daylilies Voyager Angeline, Voyager Victory Girl, and Voyager Flashy Pride are together along with his large Voyager Pilot Lady and Voyager Something Else; Tankesley-Clarke's showy Trickster, Prankster, and Jokester are all in one circle.

Your message has been sent successfully.

Thanks for reaching out, we will be in touch as soon as we are able.